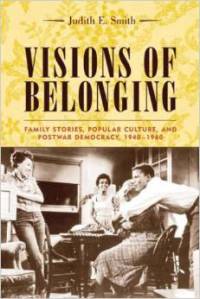 Judith Smith takes the major popular cultural texts of the postwar era—such as I Remember Mama, A Raisin in the Sun, A Tree Grows in Brooklyn, and Death of a Salesman—and brilliantly reveals how much they have to say about prevailing attitudes toward ethnicity, gender, class, race, sexuality, family and national identity. Reading this book was a revelation to me.

— Lizabeth Cohen, author of A Consumer’s Republic: the Politics of Mass Consumption in Postwar America

Judith Smith skillfully demonstrates how central issues of race and the inclusion of African Americans were to the postwar period. Her vivid and absorbing account of the narratives and representation of the family in the literature, film, and television productions of the postwar period provide an insightful new way to understand the contest for democracy in the twentieth century.

Smith’s Visions of Belonging is a masterpiece of interdisciplinary scholarship. Research, narrative, and analysis are all exemplary, making the book a “must read” on the topic of postwar American cultural and social history….throughout the history she constructs, Smith brilliantly balances race, gender, and class difference—as well as sexual difference—in a model of intersectional analysis that questions categories even while (necessarily) relying on them to tell the story.

Smith provides a subtle examination of shifting ideas about race in the postwar era that deepens our understanding of the dramatic changes in attitudes and perceptions that took place in those decades. No other book examines the cultural aspect of changing ideas about race and ethnicity with such insight and depth. …Visions of Belonging is a monumental work of cultural history. Through her meticulous examination of major works of popular art, Judith Smith has challenged the common wisdom about racial and ethnic assimilation and made a powerful contribution to our understanding of the profound changes that took place in American society from the Depression through the Cold War.

Visions is a rich work of history as well as literary criticism… an exemplar of social and cultural history. This book shows that marginalized working-class identities were also at work in the realm of cultural production. The extraordinary attention to authorial intent and public reaction will inspire anyone looking to integrate popular culture into studies of working-class history.